Mrs Oliver spoke about entry to Higher Education and was able to show how the students should complete their UCAS forms.  A representative from the University of Sussex will be explaining the financial implications of study.

The aim of the meeting is to keep you in touch with the guidance we are giving to the students.

During this half term, I have been delivering sessions to the students on the UCAS process; both beginning to fill in their application forms and starting to write their personal statements.

Congratulations to India in Year 12.
Click on the picture for more information. 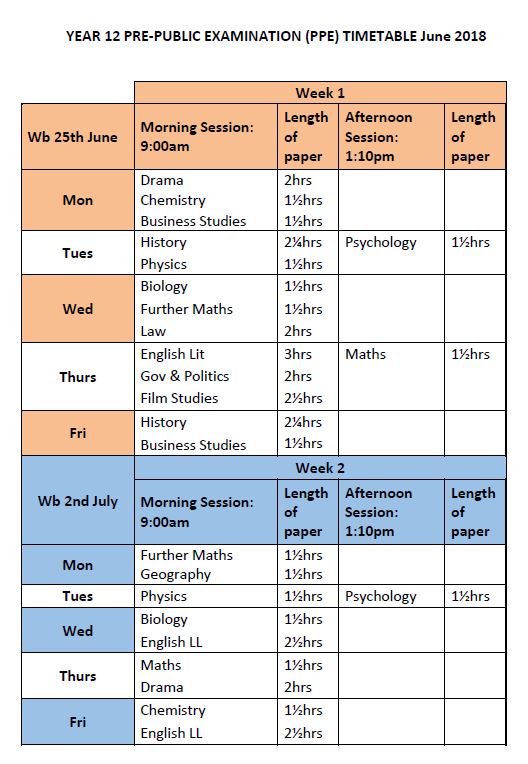 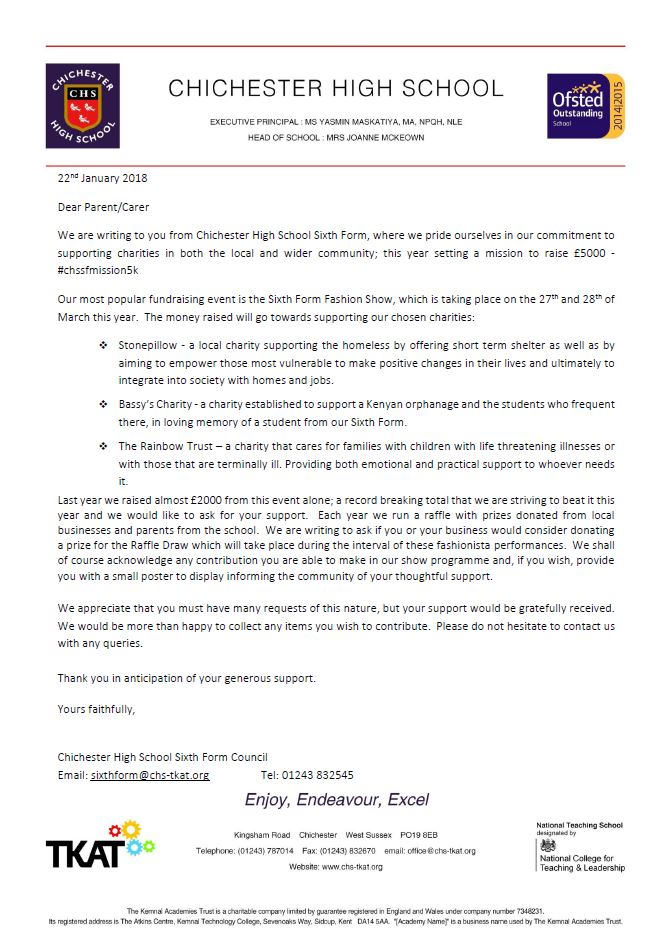 No one is born knowing how to study.

It takes time and experience to learn how to study well,  and what study skills suit you as a learner.

Today our Year 12’s took part in a study skills morning to experience a range of strategies. 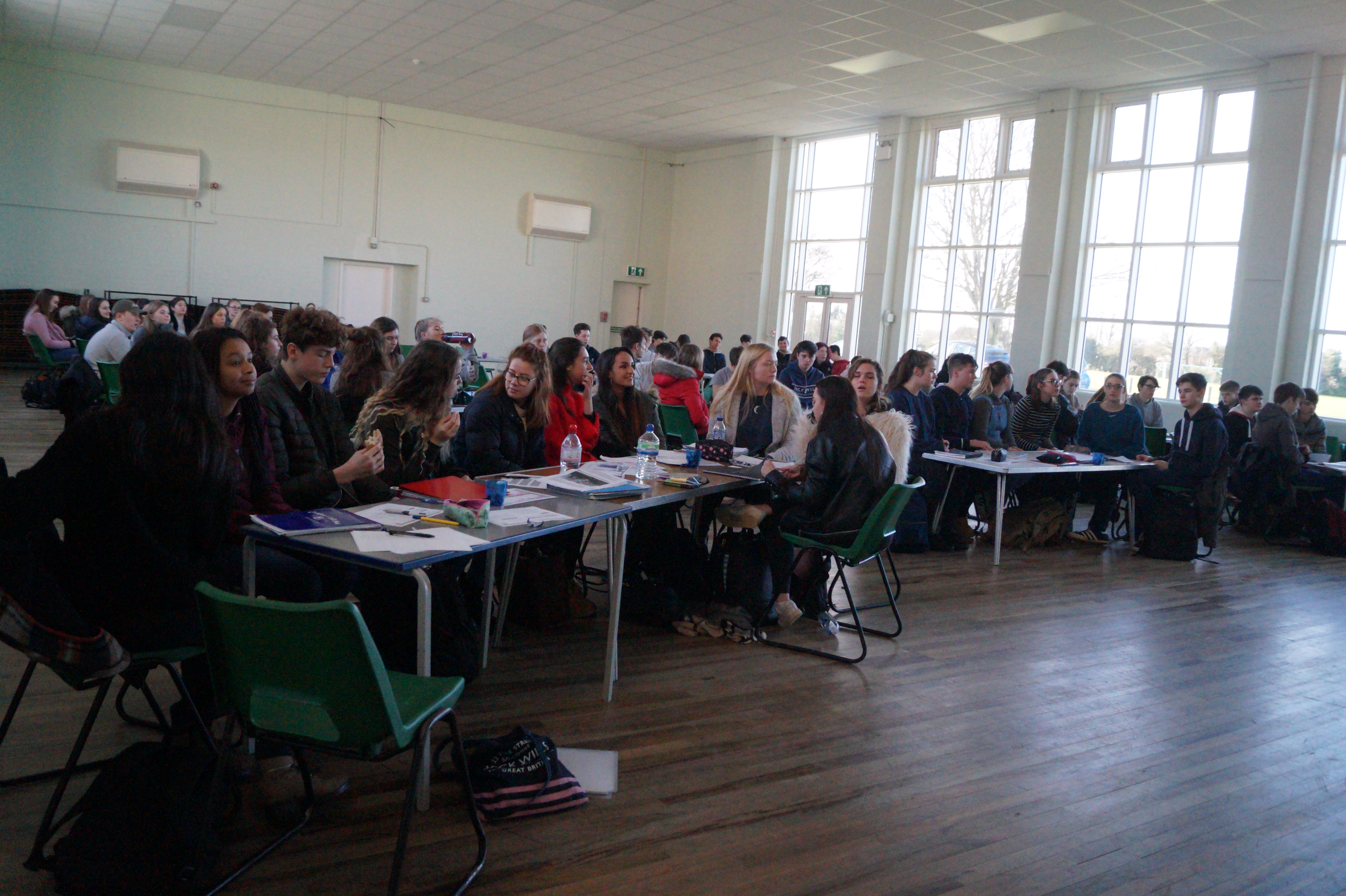 This was a highly productive morning delivered by our Sixth Form Team with an enthusiastic year group. #study #exams #chssf

Our CHS 'Aiming High Event' has been a fantastic success.
Universities, Apprenticeships and Career information all available for Year 10, 11 and 12 students.

Delighted to welcome Jolyon, Hannah and Stella back to CHS. They gave an Oxbridge presentation, telling students about their experiences as they went through the process.

Many thanks to all the agencies involved, we really appreciate your time and support.

Chichester High School Sixth Form student, Alex (Year 12) had a busy summer playing hockey for England U16 in Holland & Belgium before the Six Nations tournament in Nottingham where England beat Germany & Ireland, narrowly lost to Spain and Belgium and lost to Holland the eventual tournament winners. 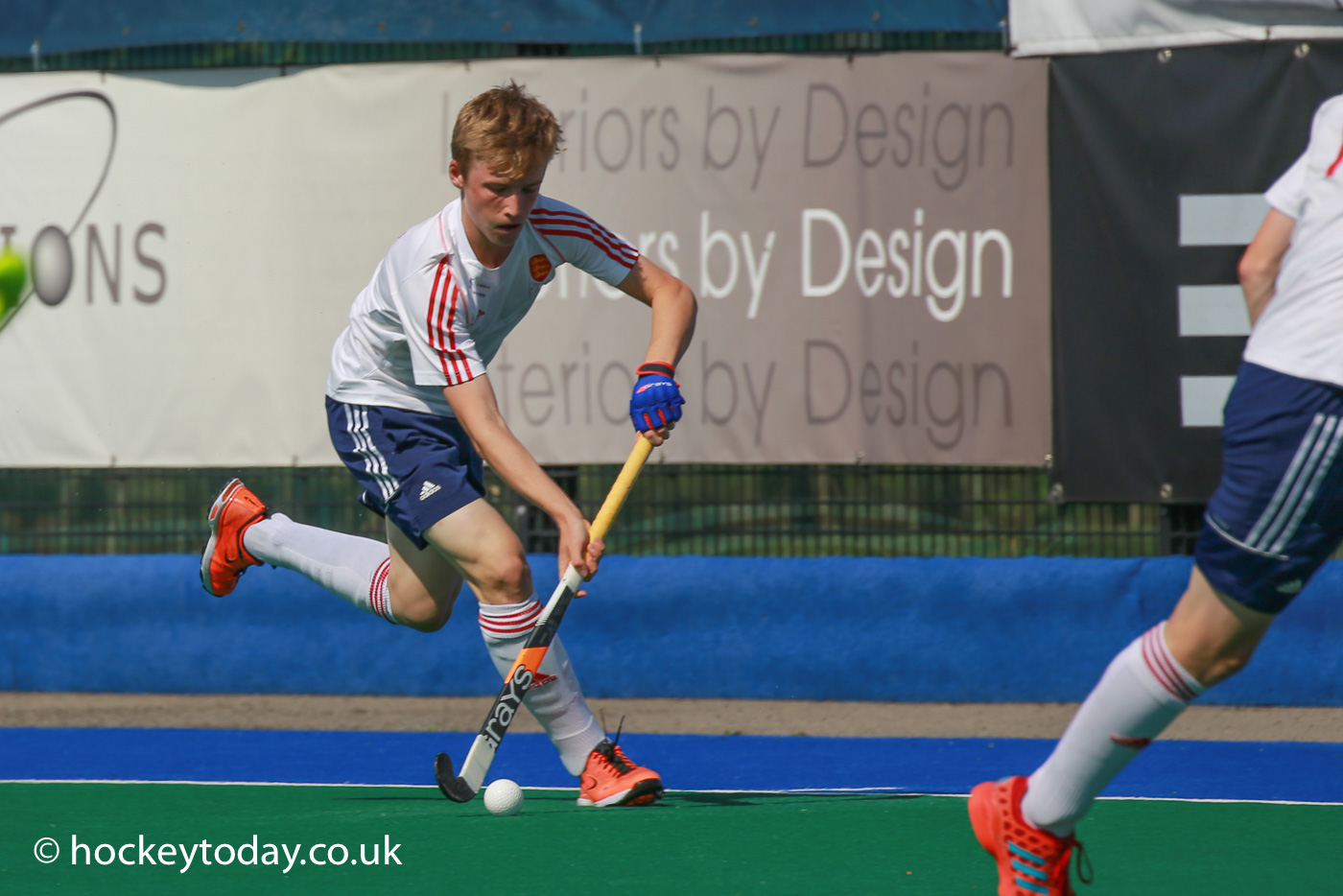 Over the August bank holiday, Alex competed in the Future's Cup (a best vs best tournament as part of the selection process for the England U18 squad). Alex's team the Wessex Leopards won the tournament with Alex scoring the opening goal in the final.

Alex found out this week that he has been selected for the U18 England squad and is looking forward to a very busy season ahead! 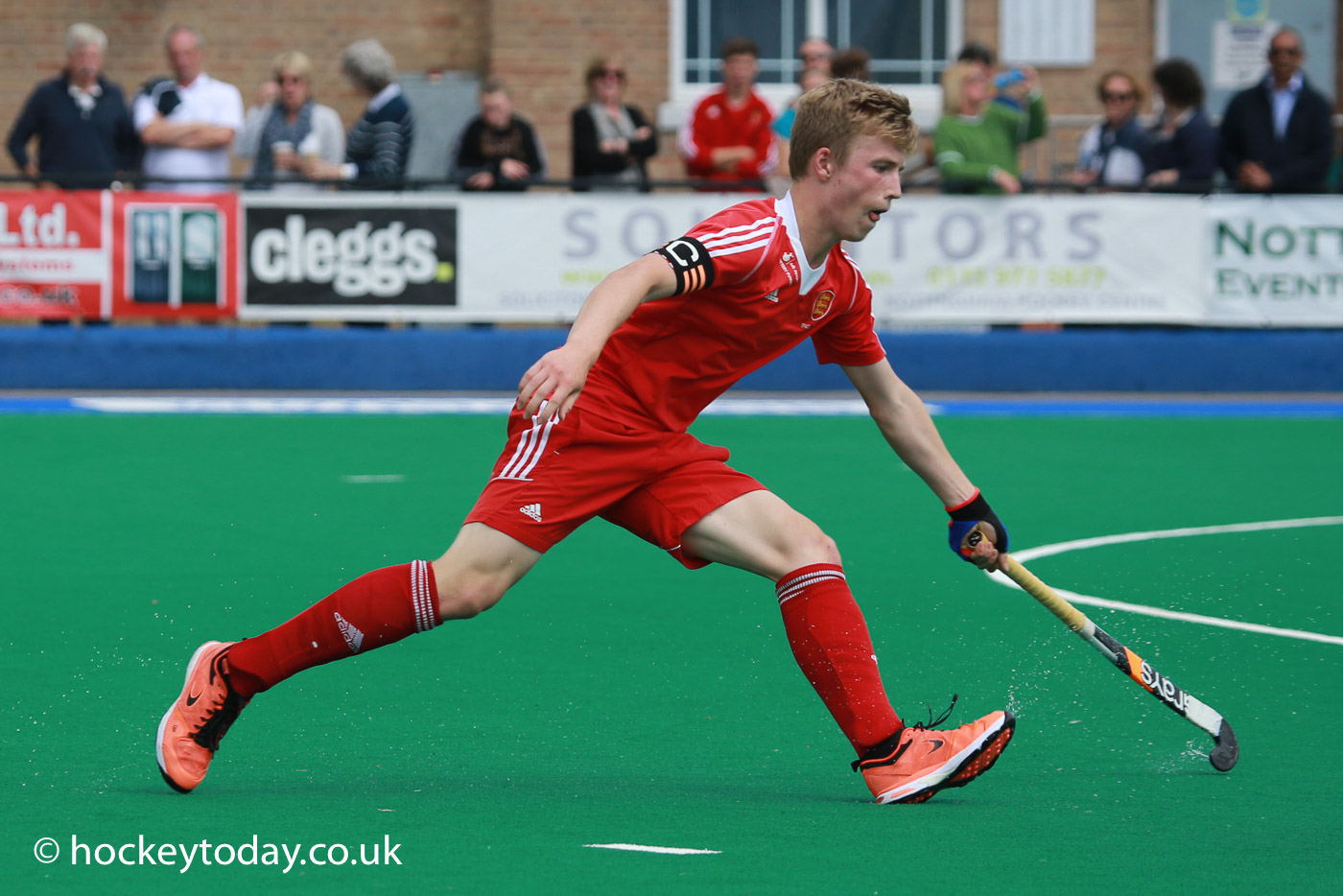 The CHS community is extremely proud of Alex and wishes him all the very best as he competes within the England squad. 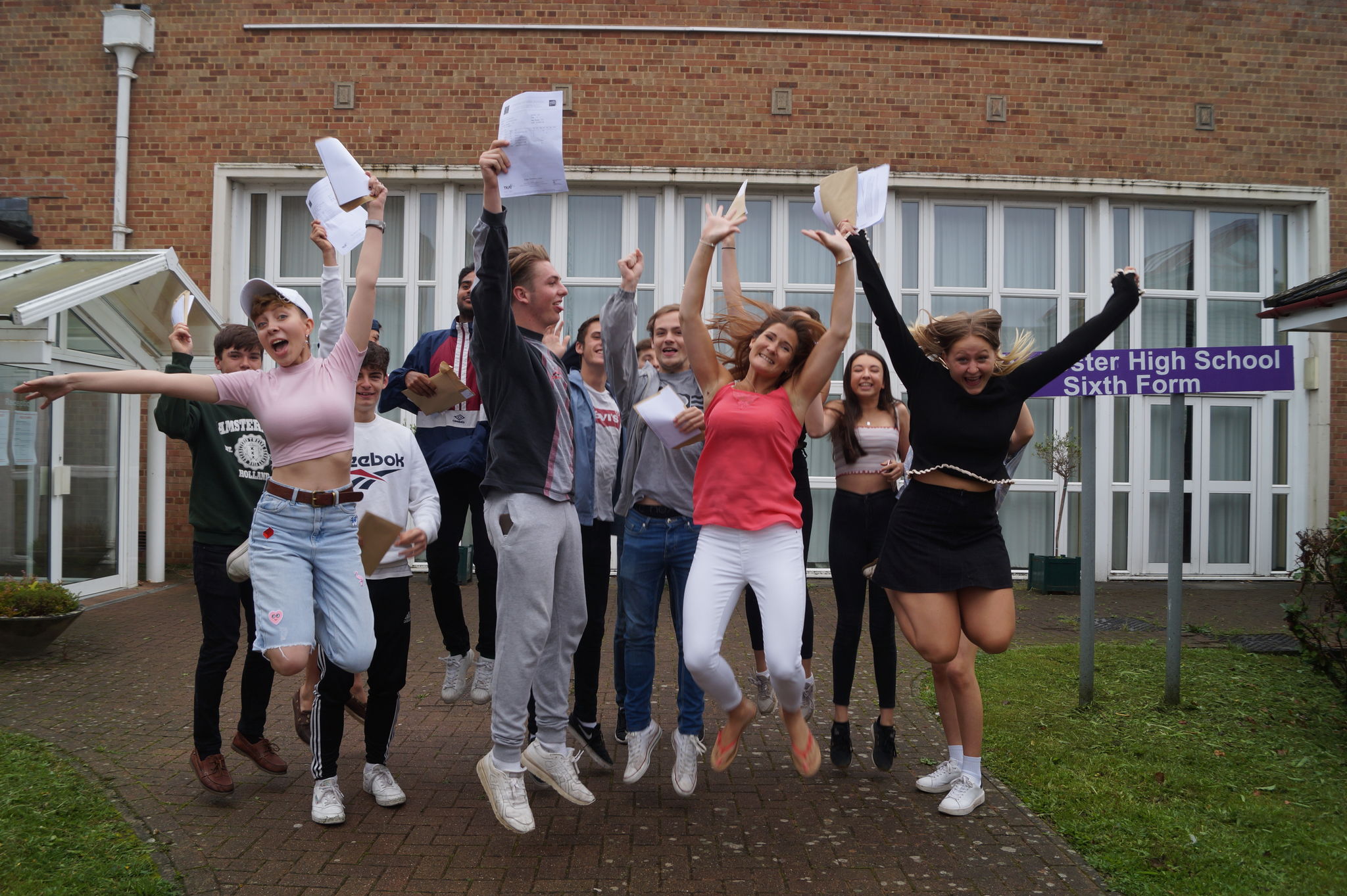 It was an extremely difficult decision as to who should be appointed to the role as each of the candidates had unique strengths.

We would, therefore, like to congratulate:
Jasmin, Lauren, Jasper and Ben  who have been awarded joint Head Boys and Head Girls.

Congratulations to all who applied for the position.

The remaining candidates have each been given individual roles that are linked to the Sixth Form council. 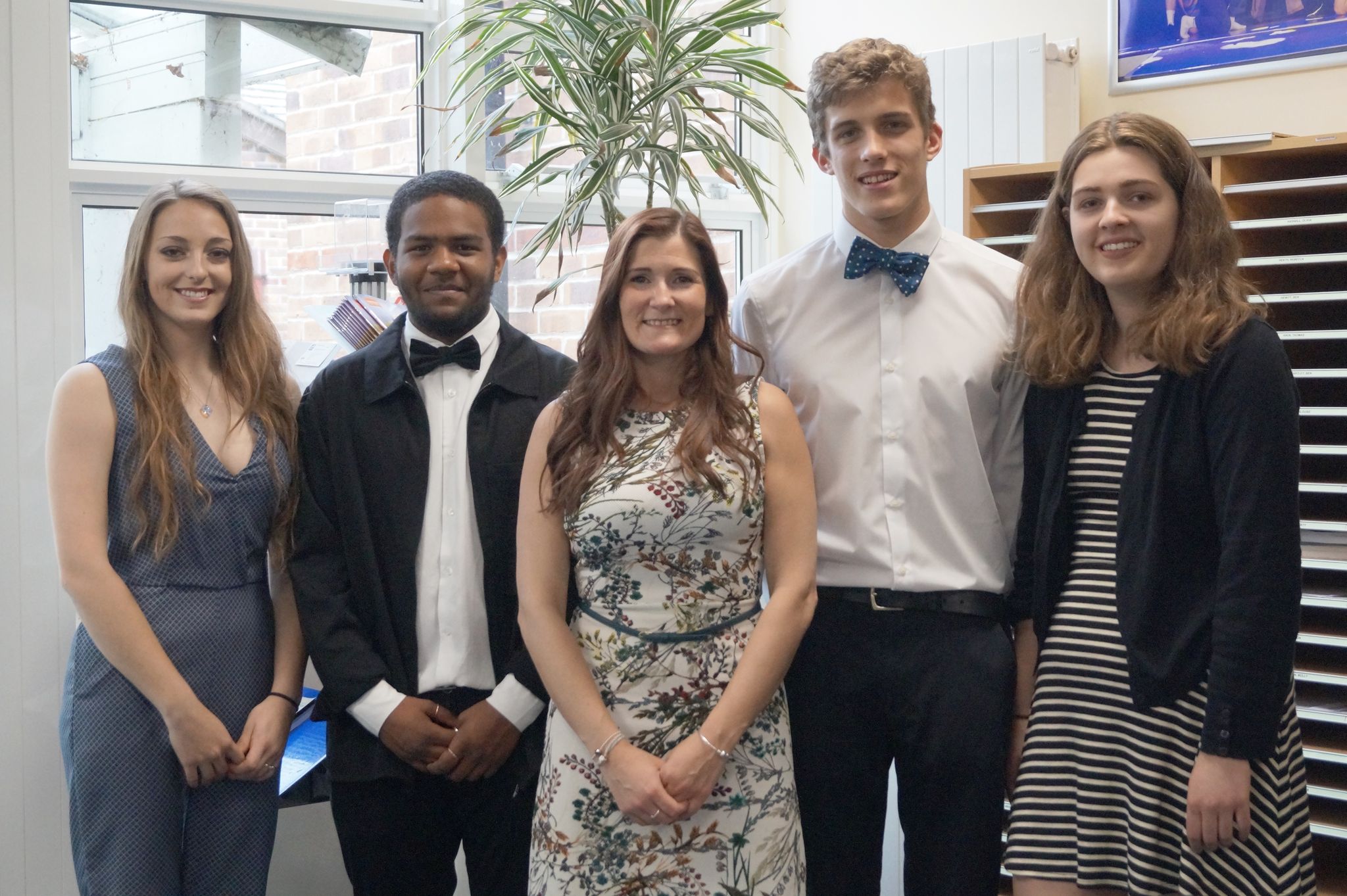 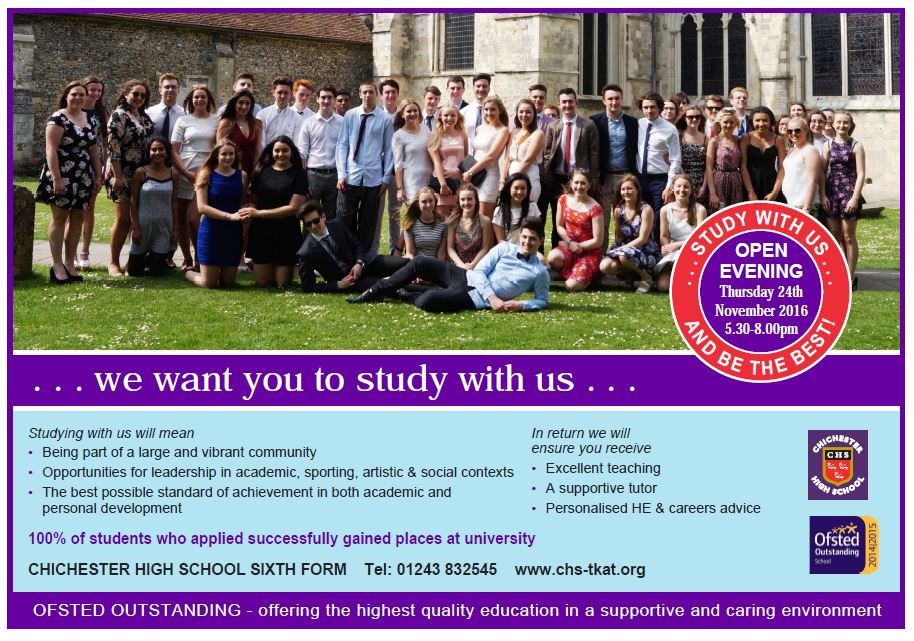 Click on the picture to view a gallery of pictures from the day. 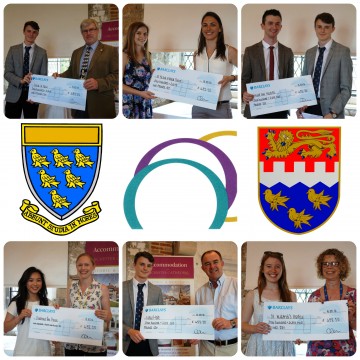 Chichester High Schools Sixth Form held their annual celebration for the Year 13 students who are leaving this year after their A Level exams.

The afternoon began with a drinks reception in the Sixth Form Centre followed by afternoon tea at the Vicar’s Hall, Chichester Cathedral.  It was a chance to say goodbye and good luck to all the students and was attended by Head Teachers, Teachers, and Governors from both CHSB and CHSG.

There were awards and presentations to students and we were pleased to welcome representatives from our chosen charities to receive cheques for the money raised this year.  The charities were St Wilfrid’s Hospice, Chestnut Tree House, Help for Heroes, St Trizah and the Walk Centre, New Hope Children’s Charity and Send a Cow.

The afternoon drew to a close with the signing of leavers’ books along with lots of laughter and tears!

We wish all our students good luck with their exams and with their successful futures!

Click on the picture to see the video of pictures! 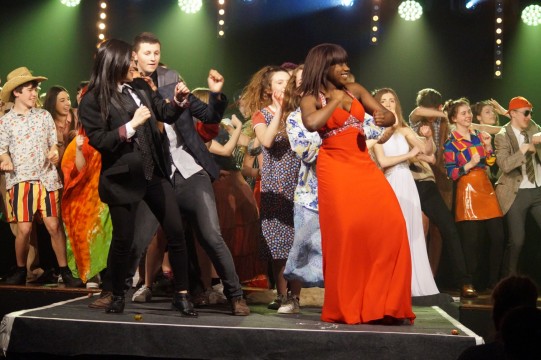 Congratulations to John (left) who has received an unconditional offer to Roehampton University to study Classical Civilisation and Philosophy.

Congratulations to Oliver has gained an academic and tennis scholarship with Emporia State University in Kansas, USA where he will study for 4 years. 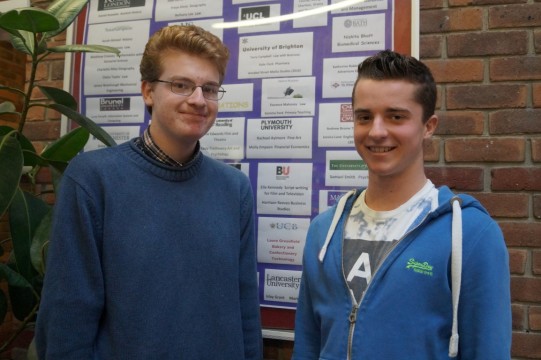 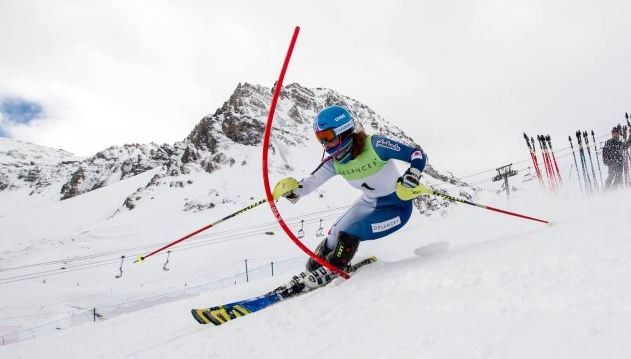 Congratulations to 6th Form students
Georgia, Mia and Stella
who have been offered places at
Cambridge University. 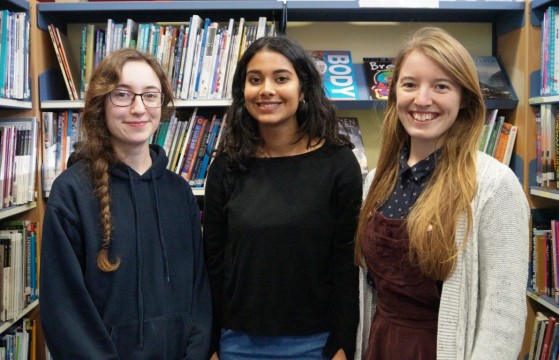 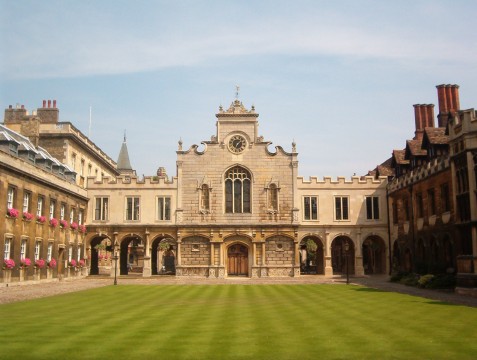 Hollie is off to LA!
Click on the picture to see what Hollie has been selected for! 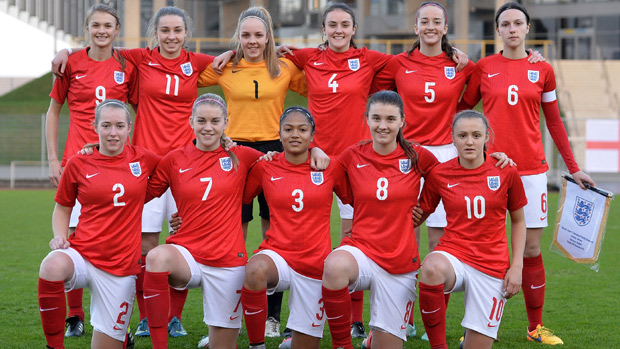 Click on the picture below to read about the successful game against France. 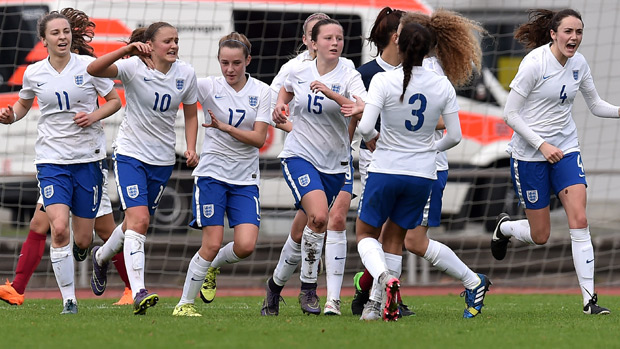 Click on Yasmin's picture to see a video of her 'doing her thing!'

Emily bravely decided to participate in a skydive for the Roy Castle Lung Cancer Foundation as her Grandmother had passed away of Lung Cancer in June of this year. 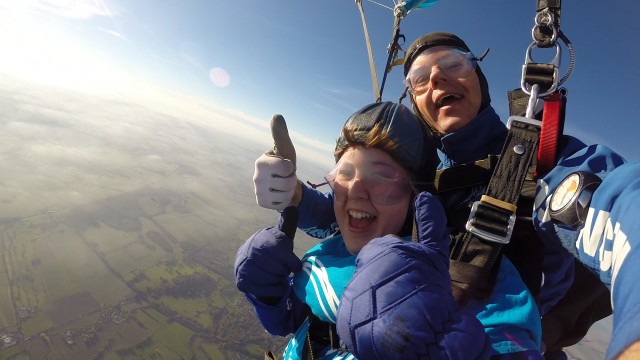 The Roy Castle Lung Cancer Foundation is the only charity in the UK wholly dedicated to defeating lung cancer, despite the fact that it is the biggest cancer killer in the UK.

In lead up to her skydive, Emily collected sponsors, organised a raffle, held a cake sale and asked the school if they could hold a non-school uniform day.

Thank you to everyone who donated and help her reach her total, an amazing amount of £2003.38!

Emily said that she really enjoyed the skydive and hopes to do even more fundraising in the future.

Congratulations to our 6th Formers who are in the Chichester High School
CHELSEA ACADEMY who won against Hove Park.

Click on the picture to see a gallery of pictures from the game..... 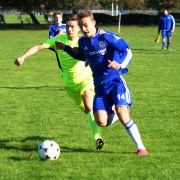 Congratulations to HOLLIE  who has just returned from the UEFA under-17 football qualifying games in Estonia where she played in all three England group matches. 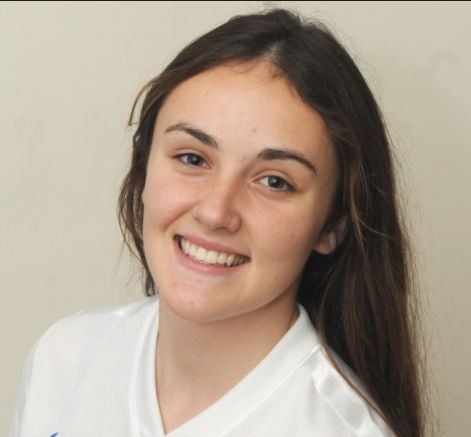 Hollie even scored her debut England goal against Estonia.

England were top of their group and have qualified for the elite round to be held in Belarus in May 2016.

The top three in the elite will secure a place in the World Cup.

Congratulations to Chichester High School Sixth Form student, Yasmin who has been selected for the British Ski and Snowboard development group for the
2015-16 season.

Yasmin has also been chosen by the sport's English governing body Snowsport England to become a national ambassador for the sport.

Yasmin was selected to the initial screening for the squad earlier this year and has now completed fitness tests and workshops and has passed to gain her position following race performance in 2014-15.

Completing her first season in FIS as an under-18 junior, she finished the season by taking the Delancey British alpine under-18 overall champion title.  She has now been chosen to spread the word about snowsports and try to help encourage more people to start skiing and snowboarding.

She has been chosen to champion snowsport in England, spreading the word about its excitement as well as fitness and skills.

Yasmin said, "I feel very privileged to have been selected to the BSS development programme, a tough process which was one of my goals for this year."

Tim Fawke, chief executive of Snowsport England, added, "Yasmin has worked hard to reach this stage and we look forward to see her progressing, we are delighted to invite her to be an ambassador to encourage young people to experience Snowsport here in England.

For more information about Snowsport England visit the websitewww.snowsportengland.org.uk